Wayne Eckerson has been a thought leader in the business intelligence and analytics field since the early 1990s. He is a noted speaker and sought-after consultant who has shared his insights and advice with a wide range of companies. He has also conducted many groundbreaking research studies, chaired numerous conferences, and written two widely read books: “The Secrets of Analytical Leaders: Insights from Information Insiders.” (2012) and “Performance Dashboards: Measuring, Monitoring, and Managing Your Business” (2005/2010).

Eckerson is principal consultant of Eckerson Group, LLC, a business-technology consulting firm that helps business leaders use data and technology to drive better insights and actions. His team of researchers and experienced consultants provide cutting-edge information and advice on business intelligence, analytics, performance management, data governance, data warehousing, and big data. They work closely with organizations that want to assess their current capabilities and develop a strategy that optimizes their investments in business intelligence and analytics.

For many years, Wayne served as director of education and research at The Data Warehousing Institute (TDWI) where he oversaw the company’s research and training programs and chaired its BI Executive Summit. He has also served as an industry analyst at the Patricia Seybold Group and TechTarget. 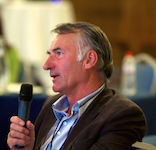 Norman Manley has been working in the field of information technology since 1973, first as a programmer and systems analyst, later as a project manager for several international companies.

Norman worked as a managing Partner and industry analyst for the Passionned Group for 10 years. He is a regular speaker at both national and international congresses and seminars on Business Intelligence and Data Integration, speaking mainly about the business benefits of adopting new technology.

In 2014, he started Decision Support Systems, a company specialized in using Business Intelligence for what it was intended – making better decisions. He still works as an industry analyst and teaches a Masters course in Business Intelligence at the University of Applied Sciences, Utrecht, The Netherlands.

Dr. Mey Mark Meyer is Managing Director of prometicon GmbH. He advises and supports companies in the introduction and optimization of project management systems and the development of project-oriented organizations.

He has previously conducted research at the Institute for Project Management and Innovation at the University of Bremen, where he worked on the design of software support for project organizations. Having studied civil engineering, he then gained experience on the planning and management of projects working for ASSMANN Consulting + Planning GmbH.