The idea of hosting software off-premises is not new. In fact, software as a service (SaaS) is just a rewording of an older term referring to companies providing the service, application service provider (ASP). ASPs were a very popular investment target during the dotcom era, but not much ever came of the business model. Like so many Internet-based startup ideas in this era, most of these companies disappeared. In fact, the only major exception to this rule was Salesforce.com, which used to refer to itself as an ASP, before the SaaS term became popular. And indeed Salseforce.com is often taken as an example in discussions of the future of Business Intelligence as a service.

But why was the ASP wave a failure and why should SaaS be different? Even the often quoted success of Salesforce.com is far removed from the company’s once loudly trumpeted goal of replacing all the ERP features of SAP and PeopleSoft. Furthermore, do the forces that could make SaaS more successful than ASP also apply to the BI market? After all, Salesforce.com is arguably more valuable to users as a means of automating sales processes than as a means of providing timely analysis for strategic or even tactical decision making. It can be viewed as an ERP company, and the history of ERP companies attempting to conquer the BI market is not particularly encouraging. So even if SaaS spawns more companies like Salesforce.com than ASP did, it does not necessarily mean the SaaS companies will be BI companies.

SaaS is not about the software that is delivered, but how it is delivered. The resources of a cloud environment such as storage, processing, memory, and network bandwidth are generally pooled and delivered in a multi-tenant model. Thus, the discussion must focus on the advantages of the delivery model itself.

One key to understanding SaaS is that there are two different ideas involved that are often mixed freely: the issue of how the software is hosted and how usage is billed. The internet allows companies to deliver software off-site, and this is the essence of cloud computing. Cloud computing environments require broadband networks to provide timely response times especially for users of thin clients. But an SaaS application is provided on demand, meaning that the users only pay for what they use, not a flat fee. This is an additional feature that is not necessarily a given in a cloud environment.

Self service is a popular idea in the BI space. In fact one of the key ways of speeding up BI projects and providing more flexibility is removing IT from the loop, thus empowering users to carry out data analysis on their own without being tied to slow bureaucratic IT processes designed to maintain the integrity of enterprise transactional systems.

And there is no question that SaaS provides a kind of flexibility that normal BI tools cannot. In fact one of the key features in cloud computing is that systems can scale up and down seamlessly, and this can be done in the simplest cases without involving complex processes on the customer side. Obviously, more complex processes such as user management are not simplified by changing the platform. This includes role management and security management.

As a result, the issue of BIaaS versus on-site hosting is probably not a key factor in choosing a product. Instead, prospective buyers should weigh issues such as costs, performance and features when choosing a BI tool. A possible exception involves data acquisition for BI tools. It could be useful to combine a BIaaS solution with a data as a service solution. Hosted data management could be interesting, if the data originates from other SaaS solutions.

CRM, which is often seen as closely related to BI, has seen a good deal of success in the SaaS sector. The most commonly cited example is SalesForce.com, but it has a growing field of competitors. But is the Salesforce model applicable to BI products?

Larger companies have been slow to adopt BIaaS. The exceptions tend to be vendors such as Nielsen and some logistics companies, but these companies supply data as well as a service. One commonly cited reason is the lack of features in BIaaS, but this is probably not an issue with the delivery model itself. As new vendors enter the market, the range of sophisticated feature sets has improved, and BIaaS is is now available for corporate performance management suites and on-demand predictive analytics.

Another major issue is data integration. It is not at all clear how an application that resides in the cloud can efficiently process on-site data. This is particularly problematic for real-time applications, which would need to support a constant stream of data being to be moved off-site and back on. For the time being it is not unreasonable to say that BIaaS is not suitable for real time BI.

There are also very few planning tools that use BIaaS. In fact, dashboards, reporting and simple analysis are by far the most common applications.

BIaaS is often combined with other, usually transactional software as a service solution. The hosted BI solution reports or analysis data that resides in the cloud so neither software nor data is needed to be transferred on premise.

The main argument offered by vendors in favor of SaaS BI is that it is less expensive than the more typical on-premises software. The upfront capital costs of hardware contribute to these savings. The other major factor is that the company is not required to operate separate servers for the BI application.

However, both of these savings result from the investment required to own and operate the hardware for BI software. Similar savings can also be realized with strictly in-house approaches such as server virtualization. Furthermore, the use of Web technology has already eliminated one of the key costs of BI initiatives, which is the cost of rolling out the front-ends to large numbers of users.

Another key cost advantage that BI SaaS brings is the ability to switch off the service when the licenses are not required. This is a major issue because it is very hard to anticipate BI tool usage in larger organizations, making BI shelfware a widespread problem. But it is also an interesting subject for applications that are only used intermittently, or seasonally. Planning tools are a good example of this kind of software.

Many, especially larger organizations are burdened by the time and effort needed to keep their software up to date. The installation of updates and upgrades can take several months until they can be used in a productive system. BIaaS solutions often offer frequent updates and new features. They relieve IT organizations from cumbersome test cycles creating additional maintenance work and gives users the opportunity to benefit from new features and functions faster.

Another important issue that sometimes confronts large projects is the sudden or temporary need to significantly increase the data storage for the application. Because cloud solutions used shared users farms with very large capacity, this is much easier to deal with than on dedicated servers.

Security is one of the key reasons why potential customers have shied away from BIaaS. Companies tend to be vigilant about securing their data, and the strategic data often found in BI applications is particularly important. Vendors recognized this challenge and have addressed it with third-party auditing and certification. The two best known certifications are SAS-70 and Systrust. Both certifications provide information to potential customers on how the vendor maintains client data. They also address issues arising from governance, regulatory and compliance (GRC).

At one level, data stored with outside providers may well be even more secure than data stored by companies themselves. This is particularly true of smaller organizations that need to work on a shoestring budget. The large server farms run by cloud operators tend to offer much more security than most companies can.

Nevertheless, there is still of good deal of nervousness in the market about using SaaS to store key data. In particular, companies seem to worry that data stored in the cloud will leak to other users. Perhaps one reason for this is the fact that SaaS providers are perceived as having their origins in the consumer business rather than the secure networking industry. Most potential users may associate BIaaS with products like Facebook, which is not known for its privacy features. Many users have also noticed that Google reads their mail to provide advertising in its email client, which is hardly reassuring. And the recent decision of Amazon — which is certified as a trusted provider — to bow to political pressure and simply cut off Wikileaks.org without notice also sent a shiver through the market. Privacy concerns are further spurred with some legislative demands, such as a law that crucial personal data may not be stored outside the country. This obviously complicates the use of service providers with a general purpose, globally active infrastructure.

Another issue that creates risk is the lack of control over data. This can only be addressed on a vendor-by-vendor basis by careful analysis of the license agreements made in advance, but it undermines the argument that BIaaS companies are more flexible. Exporting data stored off-site may bring unexpected costs. Furthermore, it may be that providers limit the usage of the data they store, and additional licensing for uses not originally planned may be expensive.

Companies looking into any BI solution have to analyze a wide variety of issues. These include performance features and usability of the product. For more information on general best practices for purchasing software, see our guide to purchasing BI software.

However, there are certain aspects of SaaS offerings that merit special attention. These include the following: 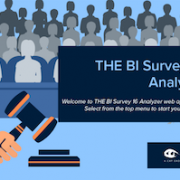 The BI Survey 16: Operational BI Continues Its Rise in 2016

Choose a product – not a vendor

Standard vs Best-of-Breed
Scroll to top